Three Weeks After the Election—Taking Stock

The US election was about three weeks ago and financial markets have wasted no time adjusting, making dramatic moves and confounding many along the way. While it will take at least several months to get a firmer handle on the investment implications of this election, we thought this would be a good moment for taking stock.

We will begin by reviewing the “early returns” in various financial markets—what markets have actually done from the market close on November 8 through November 30. Next we will consider the probable causes of the market’s recent movements. Finally, we will offer some cautionary thoughts—not to discourage anyone, but simply to keep ourselves well grounded as we look forward. 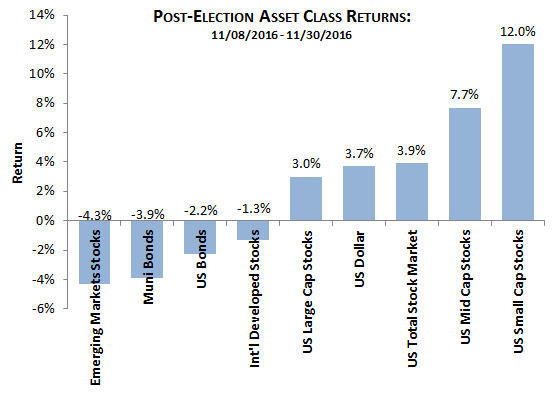 US stocks are up about 3.9% from their November 8 closing level. This figure measures the return of the whole US stock market—everything from large to mid to small cap—with the weightings proportional to total market value of each company.

Overall returns also conceal major divergences across industry sectors. Defensive sectors such as utilities and consumer staples are doTwn 4.9% and 4.2%. At the same time, economically sensitive sectors such as industrials and materials are up 6.9% and 5.7%, respectively. Financials have done best of all, rising a whopping 12.4%.

International stocks, expressed in US dollar terms, have fallen since the election. Developed markets are down about 1.3%, while emerging markets have fared substantially worse, dropping 4.3%.

The US dollar index (which measures the dollar’s value against a basket of foreign currencies) is up 3.7% since the election. As discussed below, the impact of stronger dollar is felt widely. 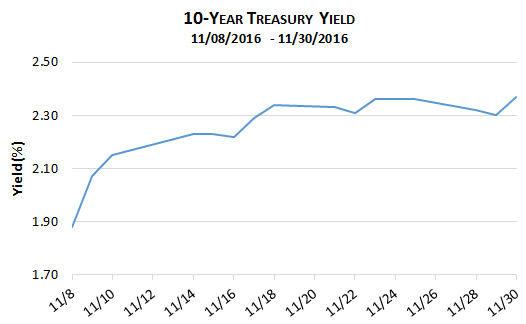 Interest Rates
US interest rates have climbed steeply since the election. The benchmark 10-year US Treasury note yield has jumped from 1.88% to 2.37%.  Bond prices move inversely to market interest rates, with longer maturity bonds the most sensitive to rate changes. Looking again to the 10-year Treasury, its price is down about 4.3% since the election, reminding us that even the most creditworthy bonds are still subject to interest rate risk. This is an instance where the more conservative part of most portfolios has declined in value, while riskier assets (e.g., stocks) have risen. Municipal bond yields are up even more.

Factors at Work
We believe the following factors explain most of the performance of US stock market over the past three weeks.

As mentioned, international equity markets have lagged. We see the following primary causes.

On the interest rate front, we’ve seen rates make a significant jump in the past three weeks. At its most basic level, interest rates represent the price of money, so one can think of rising rates as a forecast of greater demand for borrowed money. We see that demand potentially coming from at least two sources.

Some Cautionary Thoughts
Before anyone gets carried away with the post-election rally, we think there are a number of cautionary items to keep in mind.

Balance and Diversification—Eternal Truths
Perhaps the most striking aspect of financial markets’ performance over the past three weeks has been how asset classes have diverged from one another. US stocks went up, US bonds went down; economically sensitive stock sectors went up, while the more stable, higher dividend yielding stocks dropped; domestic stocks as a whole were up, international and emerging markets declined; the list goes on.

This should reinforce for everyone the wisdom of maintaining a balanced portfolio, containing both stocks and bonds, and properly reflecting both return objectives and risk tolerance. Likewise, it reminds of the virtues of diversification both across and within asset classes.

We will continue to closely monitor the landscape, digest the developments in a deliberate manner, and keep you apprised of our thinking.